If you don't use the input set Set Disabled to Yes. Default is No (input is enabled).

Master note. You can use MNote to easily set all input's notes  in one place. It shows the current Note of the input and if changed it sets Note, ANote, PNote (and DBNote if it is a rim/edge input) to the same value.

Input's alternating note. If it is different from Note then the note values will be alternating between Note and ANote for every hit. By default it is equal to Note.

Input's note for "pressrolls". If a "pressroll" is detected then the note values will be taken from PNote rather than from Note/ANote. See also PressRoll Time in Miscellaneous settings.

Input's MIDI channel. Default is 10 on all channels.

Function of the input. It can be set to Normal, PrgChg or CutOff. Default is Normal.

When set to CutOff the 'ANote' setting changes it meaning to 'cut off' level - hits with velocities below level set in 'ANote' will not trigger Note On/Off messages.

Compression level on the input. Can be set between 0 and 7. Here is an illustration of the effect this setting has on a MIDI note velocity depending on the applied compression level (0 - top line, 7 - bottom line) and input hit strength with a Linear curve setting: 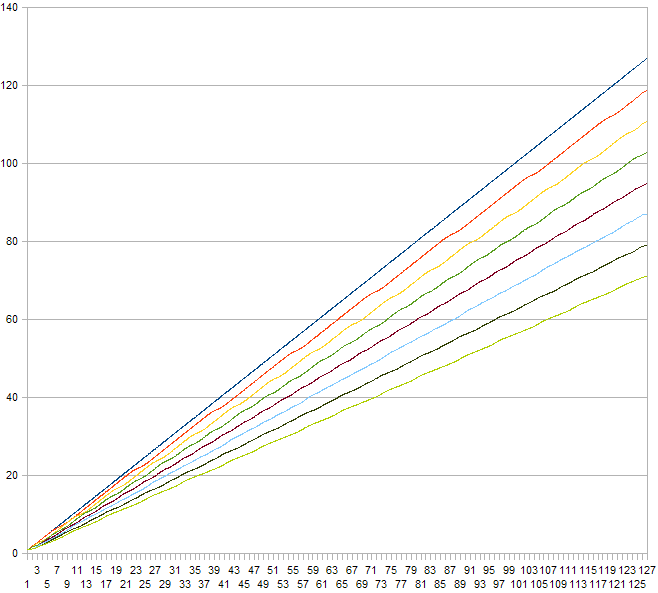 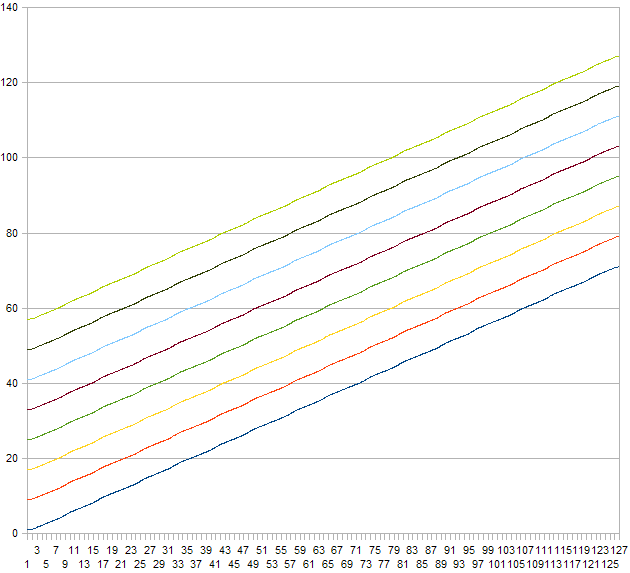 Crosstalk suppression group of the input. Can be set between 0 and 7. By default all inputs are placed into the same group meaning that the Xtalk setting will be evaluated  against signals from all pads. If some of your pads are physically/mechanically isolated you can place pads into 8 different Xtalk groups so that the Xtalk setting only evaluated against within the same group thus avoiding unnecessary suppression.

For piezo inputs: Input threshold level. Sets at what minimum (relative electrical) level a signal will be detected as a hit. This is one of the main settings effecting overall performance of the drum kit and the best actual value depends on types of pads used. It may take a while to find the best value.

When set to Yes, MegaDrum tries to auto adjust HighLevel for the input. Can be used for an initial setup to get a sense how 'hot' or 'cold' the pad is.  After this, set it to No and adjust HighLevel manually using the auto detected level as a guidance.

Retrigger period in milliseconds for the input. Determines how many milliseconds must pass after a previously detected signal for a new signal to be detected to prevent a 'machine gun' effect or false triggering due to vibration after a hit. As a Threshold setting this is one is one of the most important parameters and it may take some time to find the best value. Ideally it should be set as low as possible and let 'Dynamic Threshold' to combat the 'machine gun' and false triggering. But if even with highest Dynamic Threshold Levels and Dynamic  Threshold Decay times you still get these unwanted effects you may need to raise Retrigger level. On DIY pads and cymbals I have Retrigger set between 4 and 12 milliseconds. Setting it too high will prevent you from doing fast drum rolls.

Extra false triggering suppression. Disabled by default. Can be enabled for some pads/cymbals with very long inconsistent after hit vibration but it will negatively affect pressrolls and very fast rolls. Ignored on Atmega.

Rolls smoothing level. Disabled by default (0) and can be set to 1 (lightest smoothing), 2 or 3 (strongest smoothing). When set to 1, 2 or 3 the MIDI Note On levels will be smoothed if hits from the same input come within Note Off Delay. Ignored on Atmega.

Minimum scan time for the input. Measured/shown in 1/10th of millisecond. Can be set between 1 and 100 (0.1 - 10ms). When MegaDrum detects a signal above Threshold/Dynamic threshold, it will keep sampling it for MinScan period of time before marking the signal as registered and making it ready to be sent over MIDI next MegaDrum scans (scan time is set by 'Latency') all channels for registered signals.
Lowering it will improve Latency (MegaDrum latency is between Latency and and Latency+MinScan) and may worsen level accuracy. Raising it will worsen Latency and may improve level accuracy. Generally for rubber type pads/cymbals setting MinScan to 20 (2ms) is enough for proper signal level detection. For mesh type pads you may need to raise MinScan to 30~50 - the bigger mesh type pads the higher MinScan is required for proper signal level detection..

For Rim/Edge inputs: Can be set as either Piezo or Switch. Sets the type of a trigger connected to the input. You can set it as Switch only if the Head/Bow input DualHead parameter is set to Yes or 3Way.

If you don't use 3rd zone set Set 3rd Dsbld to Yes. Default is No (3rd zone is enabled).

For piezo/switch/switch 3 zones pdas/cymbals: Note number for the 3rd zone of a 3 zone Yamaha style pad/cymbal.
For piezo/piezo dual zone pads: Note number for a rim shot. Set equal to a note number of the rim to disable rim shot functionality. Note that this feature is still experimental. Right settings for HighLevel on both the head and the rim inputs is very important. Raising MinScan on both the head and the rim can also improve rim shot reliability.

3rd zone alternating note. If it is different from BNote then the note values will be alternating between BNote and ABNote for every hit. By default it is equal to BNote.

3rd zone's note for "pressrolls". If a "pressroll" is detected then the note values will be taken from PBNote rather than from BNote/ABNote. See also PressRoll Time in Miscellaneous settings.

For dual piezo/piezo pads: Midpoint is used to fine tune separation between head and rim hits. It can be set between 0 and 15. The higher the value the easier to get rim hits and more difficult to get head hits and vice versa.
For dual piezo/switch pads this option is disabled.

For dual piezo/piezo pads: The width of signals for rim shots. It can be set between 0 and 15. The higher the value the easier to get rim shots and more likely to get false rim shots on head or rim hits and vice versa.
For dual piezo/switch pads this option is disabled.

For piezo/switch/switch 3 zones pdas/cymbals:Input switch threshold for the 3rd zone of a 3 zone Yamaha style pad/cymbal. Sets below which level the Bell switch is detected as hit/pressed. This level must be lower than Threshold level of the Rim/Edge input of a switch type trigger. If the connected pad is dual zone piezo/switch type or a 3way Roland cymbal, BThrshold must be set to 0 to prevent false triggering of Bell notes or alternatively set all Bell Notes (BNote, ABNote, PBNote) equal to the Edge/Rim Notes.
For dual piezo/piezo pads this option is disabled.